Every now and then Iceland makes the world news. Usually the news about my little island nation are insignificant and complimentary. They tend to either report how happy we are, how old we get or how well our tiny little sport teams are doing. But sometimes, we also make the news for being really bad at finance, and most recently our prime minister has made many of us look a bit like idiots for allowing him to hold such an important position.

For the few of you who do not know the background, Iceland prime minister has been on the news all over the world next to stand-up James Bond style supervillains such as Gadaffi and Assad. The reason, he owned a company in a tax haven and „forgot“ to disclose this when he took over the post as prime minister.

Now, I am not one to say that he has broken any laws. Also, I am not even sure that he even intended to do so. But, that does not change the fact that he, with his wife, went through the effort of creating a fake company on an island miles away from where they live and go about their businesses. And until he explains to my why he went thorough the trouble, me and other Icelanders will be, to say the least, upset.

Which brings me to the reason I started writing this post, how upset is the Icelandic population and who are the most upset?

It turns out that the answer to the question is: totally pissed off. In a few days, more than 30.000 people have signed an online petition asking the PM to stand down. This might not sound like much, but be reminded that only 330.000 people live in Iceland. So, 30.000 is around 9% of everybody in Iceland.

The figure below puts this into perspective. It shows that if Germany were to reach the same number of signatures as a proportion of total inhabitants, they would need no less than 7m people to sign. The USA would need around 30m and China no less than 120 million people to sign. At the same time, BVI, an infamous tax haven, would only need 2,500 people to go online to match Iceland’s signature numbers.

Figure 1: The British Virgin Islands only need around 2,500 signatures while China needs more than 100 million to match Iceland

But not all Icelanders are equally pissed off. Some are more pissed off, others are less pissed off, and a few seem not to care at all. From the feed an the news, and the petition obviously, I new that many people were upset. But then I thought to myself: is it only People from Reykjavik that are upset or is it equally distributed across the country? Icelandic news and my Facebook feed tend to be Reykjavikcentric and most of the views that I was getting was from people from Reykjavik. Well, lucky that the petition web page publishes the computer IP location by town.

Well, the answer to the question is, „yes, it is fairly spread out“ (see charts below).  First of all, the biggest advocate for the registration of the PM was a tiny little town in the far north of the name of Kopasker. While only 16 people in the town signed the petition, its small sized made that into a whooping 13% of the total population.

In the second place, as I had expected, Reykjavik (IP address signatures from Iceland amounted to more than 10% of the population). Then on Kopasker’s and Reykjavik’s heal are towns from all over of all sizes and builds. And what this tells me is that my news and Facebook feed, as Reykjavikcentric as it might be, on this occasion was actually fairly representative of the rest of Iceland.

The places that are currently less accurately represented in my feed and were probably more happy to see Sigmundur  keep his post as PM are the people from places such as Alftanes, Olafsvik and Saudarkrokur. In those towns only around 2% signed the petition (at the point of my data extraction). That is around 3% less than the average Icelandic town.

Figure 2: Almost everyone lives in Reykjavik

Figure 3: Proportion of town population that signed the petition 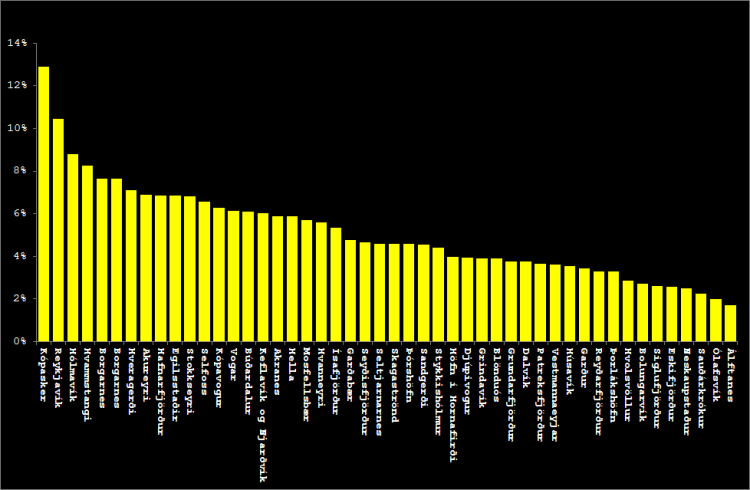 Now, look at the chart below and what you can see is simple. The yellow towns are towns who really wanted the PM to resign (and they got their wish, or at least he quit) and the red are towns who are more indifferent than the average town. There are many potential explanations for this. After all, political views, demographics, political engagement all tend to vary geographically.

Figure 4: What towns are above and below the average

However, I think there is a bit more to it. I think that one reason might simply be that some people on the „red“ towns did either not know of this petition, or intended to sign it later. If that is the case, then those same people must now be thinking that they missed the boat. Sigmundur has resigned, so the petition is closed. Well not so fast, the petition is still open and if you are from one of the red towns and want to get it into the yellow zone, you can still sign it right here.

Looking at the status of the petition right now, the number of signatures is at 30,111.  Since proportions can be a bit deceptive, for Reykjavik (second in relative terms and first in absolute) to beat Kopasker in terms of % of population signed, they need no less than 3,000 more votes. However, if the „red“ town of Djupvogur wants to lead the board, they need no more than 32 people to get online and sign the petition (or one rouge voter who would be willing to vote more 32 times).

Figure 5: How many signatures does each town need to reach Kopasker

And that is it from me now, thanks for reading.
Eiki